Understanding TBI: Part 1 - What happens to the brain during injury and the early stages of recovery from TBI? 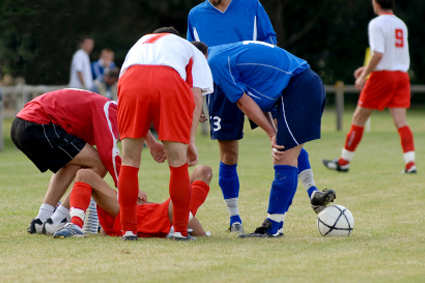 What is a brain injury?

Traumatic brain injury (TBI) refers to damage to the brain caused by an external physical force such as a car accident, a gunshot wound to the head, or a fall. A TBI is not caused by something internal such as a stroke or tumor, and does not include damage to the brain due to prolonged lack of oxygen (anoxic brain injuries). It is possible to have a TBI and never lose consciousness. For example, someone with a penetrating gunshot wound to the head may not lose consciousness.

Commonly accepted criteria established by the TBI Model Systems (TBIMS) to identify the presence and severity of TBI include:

Damage to brain tissue caused by an external force and at least one of the following:

Statistics from Centers for Disease Control and Prevention for 2007 to 2013 indicate that the leading cause of brain injury is falls (47%). This is followed by being hit by or against an object (15%) and car crashes (14%). Many of these injuries are mild. If you focus only on moderate to severe TBI (those that may require admission to a neurointensive care unit), falls are the most common cause of TBI, followed by car crashes and assaults.

The brain is about 3-4 pounds of extremely delicate soft tissue floating in fluid within the skull. Under the skull there are three layers of membrane that cover and protect the brain. The brain tissue is soft and therefore can be compressed (squeezed), pulled, and stretched. When there is sudden speeding up and slowing down, such as in a car crash or fall, the brain can move around violently inside the skull, resulting in injury.

In a closed head injury, damage occurs because of a blow to the person's head or having the head stop suddenly after moving at high speed. This causes the brain to move forward and back or from side to side, such that it collides with the bony skull around it. This jarring movement bruises brain tissue. When brain injury occurs at high speed, the brain rotates inside the skull. This type of rotational movement damages axons (part of the nerve cell), and blood vessels by stetching and tearing them. After a closed head injury, damage can occur in specific brain areas (localized injury) or throughout the brain (diffuse axonal injury).

Damage following open head injury tends to be localized and therefore damage tends to be limited to a specific area of the brain. However, such injuries can be as severe as closed head injuries, depending on the destructive path of the bullet or other invasive object within the brain.

Primary injuries occur at the time of injury and there is nothing that physicians can do to reverse those injuries. Instead, the goal of the treatment team in the hospital is to prevent any further, or secondary, injury to the brain. Below are some primary injuries.

Secondary injuries occur after the initial injury, usually within a few days. Secondary injury may be caused by oxygen not reaching the brain, which can be the result of continued low blood pressure or increased intracranial pressure (pressure inside the skull) from brain tissue swelling.

Measuring the severity of TBI

"Severity of injury" refers to the degree or extent of brain tissue damage. The degree of damage is estimated by measuring the duration of loss of consciousness, the depth of coma and level of amnesia (memory loss), and through brain scans.

The Glasgow Coma Scale (GCS) is used to measure the depth of coma. The GCS rates three aspects of functioning: eye opening, movement and verbal response. Individuals in deep coma score very low on all these aspects of functioning, while those less severely injured or recovering from coma score higher. A GCS score of 3 indicates the deepest level of coma, describing a person who is totally unresponsive. A score of 9 or more indicates that the person is no longer in coma, but is not fully alert. The highest score (15) refers to a person who is fully conscious.

A person's first GCS score is often done at the roadside by the emergency response personnel. In many instances, moderately to severely injured people are intubated (a tube is placed down the throat and into the air passage into the lungs) at the scene of the injury to ensure the person gets enough oxygen. To do the intubation the person must be sedated (given medication that makes the person go to sleep). So, by the time the person arrives at the hospital he/she has already received sedating medications and has a breathing tube in place. Under these conditions it is impossible for a person to talk, so the doctors cannot assess the verbal part of the GCS. People in this situation often receive a "T" after the GCS score, indicating that they were intubated when the examination took place, so you might see a score of 5T, for instance.

The GCS is done at intervals in the neurointensive care unit to document a person's recovery.

The duration of a confusional state following injury, often referred to as post-traumatic amnesia (PTA), is another good estimate for severity of a brain injury. Anytime a person has a major blow to the head he or she will not remember the injury and related events for sometime afterward. People with these injuries might not recall having spoken to someone just a couple of hours ago and may repeat things they have already said. This is the period of post-traumatic amnesia. The longer the duration of confusion/amnesia, the more severe the brain damage.

The cranial tomography (CT) scan is a type of X-ray that shows problems in the brain such as bruises, blood clots, and swelling. CT scans are not painful. People with moderate to severe TBI will have several CT scans while in the hospital to keep track of lesions (damaged areas in the brain). In some cases, a magnetic resonance imaging (MRI) scan may also be performed. This also creates a picture of the brain based on magnetic properties of molecules in tissue. Most people with severe TBI will have an abnormality on a CT scan or MRI scan. These scans cannot detect all types of brain injuries, so it is possible to have a severe TBI and be in coma even though the scan results are normal.

The brain is like any other body tissue when it gets injured: it fills with fluid and swells. Because of the hard skull around it, however, the brain has nowhere to expand as it swells. This swelling increases pressure inside the head (intracranial pressure), which can cause further injury to the brain. Decreasing and controlling intracranial pressure is a major focus of medical treatment early after a TBI. If intracranial pressure remains high, it can prevent blood passage to tissue, which results in further brain injury.

Our brains operate based on a delicate chemistry. Chemical substances in the brain called neurotransmitters are necessary for communication between neurons, the specialized cells within our central nervous system. When the brain is functioning normally, chemical signals are sent from neuron to neuron, and groups of neurons work together to perform functions.

TBI disturbs the delicate chemistry of the brain so that the neurons cannot function normally. This results in changes in thinking and behavior. It can take weeks and sometimes months for the brain to resolve the chemical imbalance that occurs with TBI. As the chemistry of the brain improves, so can the person's ability to function. This is one reason that someone may make rapid progress in the first few weeks after an injury.

Natural plasticity (ability of change) of the brain

The brain is a dynamic organ that has a natural ability to adapt and change with time. Even after it has been injured, the brain changes by setting up new connections between neurons that carry the messages within our brains. We now know the brain can create new neurons in some parts of the brain, although the extent and purpose of this is still uncertain.

Plasticity of the brain occurs at every stage of development throughout the life cycle. Plasticity is more likely to occur when there is stimulation of the neural system, meaning that the brain must be active to adapt. Changes do not occur without exposure to a stimulating environment that prompts the brain to work. These changes do not occur quickly. That is one of the reasons that recovery goes on for months and sometimes years following TBI.

Copyright© 2018 Model Systems Knowledge Translation Center (MSKTC). You can freely reproduce and distribute this content. Include proper attribution. But you must get permission before using this content in fee-based products.