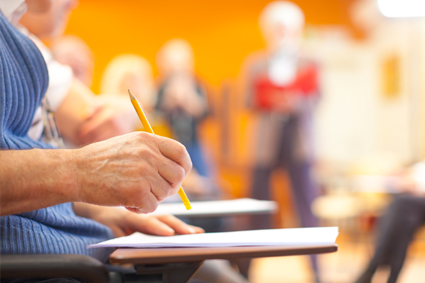 Researchers examined how education level is related to cognitive status in people with traumatic brain injury (TBI). Cognitive problems, such as slower processing speed, poor working memory, and memory loss are common after TBI. The study tested the cognitive reserve hypothesis, which proposes that greater lifetime education may allow some people to better cope with trauma or disease. Greater lifetime education might help explain observed differences in cognition among people with TBI.

Test results using the selected cognitive tests were lower in subjects with TBI than controls. Researchers found a strong positive relationship between education level and higher cognitive status among those with TBI. This suggests that having a higher lifetime education level may help reduce the negative effects of TBI on memory and processing information. The researchers also observed that cognitive performance was worse among people with TBI who had low levels of education than participants without TBI. This study supports the cognitive reserve hypothesis that higher lifetime education is associated with less cognitive decline after disease. The results of this study help to explain why people with TBI who have similar injury levels may experience different levels of cognitive impairment after their injury.

1. Processing speed, assessed through an oral version of the Symbol Digit Modalities Test

Researchers analyzed scores for each problem and then computed one cognitive score for each person in the study.