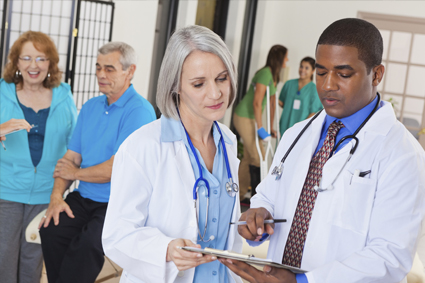 Multiple patient characteristics and severity of injury were accounted for in the analyses. Patients at all centers showed improvement in their functional status compared with their status at admission. However, significant variation in patient outcomes was found across these centers of excellence, with some achieving significantly stronger patient outcomes than others, particularly at the time of discharge. There was an at least 25% difference between the best performing site and the site with the lowest outcomes at discharge. Most centers performed as expected at one year follow-up. This study also showed large variations across centers in duration of inpatient rehabilitation stay and efficiency in achieving functional improvements during rehabilitation. These findings suggest a possible disparity between centers in care delivery or the organizational structure of the TBIMS centers. A future study will be forthcoming to help identify factors that may affect “best practices” with respect to processes of care, in order to help achieve best outcomes in TBIMS centers that maximize efficiency and minimize costs.

Data for this study was obtained from a multicenter data set gathered by 21 TBIMS centers. In this study, 6,975 individuals with moderate to severe TBI were included over a 10 year period (1999-2008). Patients who were at least 16 years old were eligible for the study.

All patients enrolled in the multicenter study received medical care within 24 hours of injury in acute-care hospitals affiliated with TBIMS and were then directly transferred to an affiliated rehabilitation program. Patients were admitted to rehabilitation centers three weeks after sustaining injuries, on average. The average inpatient rehabilitation stay was 26 days, with a range of 17 to 44 days at various centers. More than 80% of the patients were discharged to their homes. Patients are contacted at specific time points following their injury to inquire about their long-term functional and neurologic status. Archived data collected at the time of discharge and at patients’ one year follow-up was analyzed for this study. Patient outcomes were measured using the Functional Independence Measure (FIM) and Disability Rating Scale (DRS) at discharge and at one year; as well as the Glasgow Outcome Scale-Extended (GOS-E) at one year.