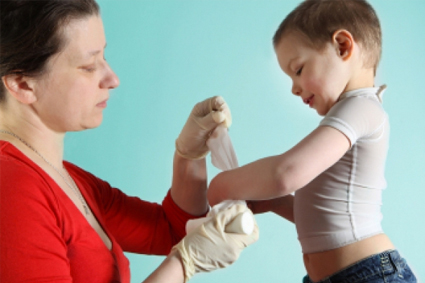 Researchers examined how inhalation injury, in addition to burn injury, affects the metabolic rate of severely burned children. Metabolic rate measures how quickly the body uses energy. As the rate goes up, the body uses more protein for energy. This leads to muscle loss. When coupled with severe burn, inhalation injury is the main reason for burn-related death. On its own, inhalation injury increases the body’s demand for and use of oxygen. This makes breathing difficult and increases metabolic burden for up to 12 months after injury.

Researchers did not find any significant differences between the two groups in resting metabolic rate, VO2, and length of hospital stay. Thus, inhalation injury was not linked with a higher metabolic rate in severely burned children. But the rate of pneumonia was more than twice as high in children with inhalation injury (27%) than in those without such an injury (13%). Those with inhalation injury also spent more days on a ventilator than children in the other group. The PaO2:FiO2 ratios in children with inhalation injury implied adult respiratory distress syndrome. This condition is marked by major inflammation of the lungs. Researchers suggest that future studies evaluate the effects of sedatives and ventilator settings, as well as the possible metabolic impact of different levels of fluids and blood products that are used during burn treatment.

Researchers examined 86 severely burned children, under 18 years of age, with ≥40% total body surface area (TBSA) burns. All participants received similar treatment by the same surgical team between 1998 and 2002. Treatment included early wound excision, antibiotic therapy, and continuous feeding through a feeding tube. Patients with anoxic brain injury, severe psychological disorders, quadriplegia, or severe behavioral or cognitive disorders were excluded from the study. Written informed consent was obtained from guardians of all the participants.What did the study find?

Children were placed into two study groups, each with similar mean ages. The “no inhalation injury” group included 42 children. The “inhalation injury” group included 44 children who had soot in the larynx below the vocal cords or early inflammatory changes of the moist tissue in their trachea. Researchers used indirect calorimetry to estimate metabolic levels in children while they slept. Resting metabolic rate and volume of oxygen consumed (VO2) were measured three times: during first week of hospital admission, day 10 post-burn, and when participants were 95% healed. Researchers also compared levels of oxygen in the blood (PaO2) with levels of oxygen breathed (FiO2).