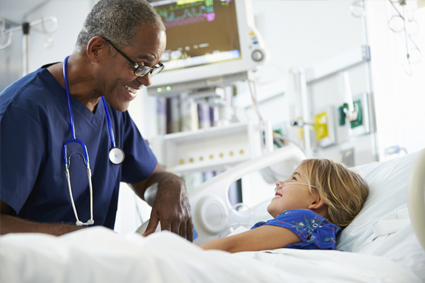 Impact of Stress-Induced Diabetes on Outcomes in Severely Burned Children

People who have sustained burn injuries are reported to have high levels of blood sugar. This study aimed to determine if insulin treatment has a measurable effect in treating severely burned children. The study looked at blood sugar levels, body composition,resting energy expenditure (REE), muscle strength, hormones,serum markers, liver function, and mortality. The patients received insulin according to a sliding scale when their blood sugar rose above 180mg/dL. Researchers also looked at whether these effects might be related to how much insulin is given to patients.

The study showed that high blood sugar levels, hyperglycemia, in severely burned children is age related, with older children requiring more insulin. Children receiving insulin had lower blood sugar levels and a significantly higher REE. The children receiving insulin also had improved bone mineral content and muscle strength compared to the children in the non-treated group. Children who had an infection had an increased incidence of hyperglycemia with each additional wound infection. There was a 12% mortality rate in children receiving insulin and no one died in the group that did not receive insulin. The length of hospital stay was lower in the children who did not receive insulin. Researchers suggest that there is a need for new glucose-lowering strategies in severely burned children. More research should be done to try to explain the new observation that the use of insulin for children with burns is associated with elevated REE and increased mortality.

The study included 1,035 patients with burns on>30% of the total body surface area (TBSA). Participants were under 18 years of age at the time of injury, admitted to the hospital within 7 days of burn injury, and required at least one operative intervention. In order to be considered, these participants had informed consent, no pre-existing conditions present within the past 5 years, and burns needing to be treated surgically in the operating room.

Researchers divided the pediatric patients with massive burns into two study groups. One group (n=145) received insulin and the other group (n=98) did not receive insulin. Researchers did analyses to determine the differences in illnesses and deaths related to insulin treatment. The effect of insulin on body responses such as muscle strength, hormones, serum marker, and liver function was also examined. Patients’ descriptions and injury characteristics were recorded at the time of admission. REE was measured weekly. Data were analyzed to explore the relationship between levels of blood sugar (high or low) in participants who received the insulin and those who did not. Researchers also compared the number of infections, age, sex, TBSA, time post burn, and presence of inhalation injury in the two groups.